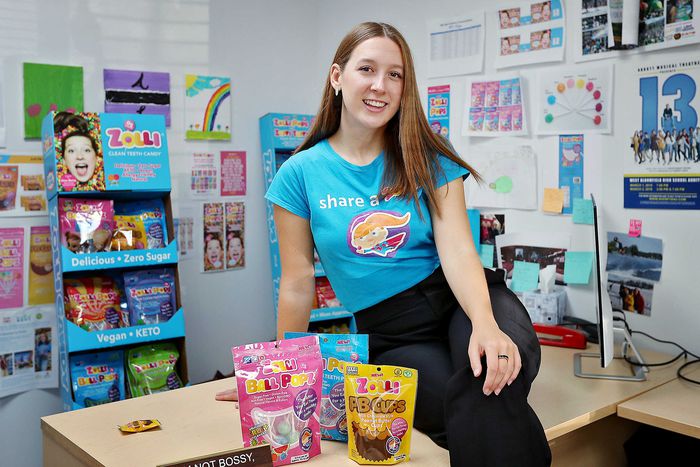 One of the fastest-growing U.S. candy companies is in Michigan. And it’s run by a 16-year-old

By Taylor DesOrmeau for mLive | tdesorme@mlive.com

Alina Morse has been to the White House. She’s been a guest on “Dr. Oz.” She was interviewed on Good Morning America, appeared on “Shark Tank” and was part of the “Boss Baby” red carpet premier in New York City.

But the moment that really caught her off guard was in her Walled Lake Central High School marketing class.

Morse is the CEO of ZolliCandy, which she started as a 9-year-old with her dad, Tom Morse. Her candy doesn’t include many of the top allergens and it’s sugar free – an idea she came up with after being guilt-tripped by her father during a trip to the bank.

“The bank teller offered me a lollipop and my dad always told me, ‘You shouldn’t have candy, sugar is terrible for your teeth,’” Alina Morse said. “So I asked him, ‘Well why can’t we make a healthy lollipop that’s good for my teeth, so I can have candy and it wouldn’t be bad for me?’”

So she started experimenting with ingredients in her parents’ kitchen.

“It did not work,” Alina Morse said. “I made a mess. We had to get some new kitchen appliances.”

Her friends tried an early batch of her suckers. They “sucked,” they told her. But Morse persevered, consulting her dad and her dentist for ideas.

Read The Rest of the Story

They’ve since ditched xylitol, which can have digestive side effects. The plant-based erythritol decreases total bacteria counts, reducing cavities and tooth decay.

ZolliCandy has expanded to multiple types of lollipops, taffies and caramels – and is now moving into chocolates with its new peanut butter cups. Customers can buy the candy in some locations of Whole Foods, Rite Aid, Walmart, Kroger and CVS – or online.

Alina Morse’s company is one of the fastest-growing candy companies in the U.S., as it was ranked 1,110th on the Inc. 5000 list, which ranks private companies based on their three-year revenue growth.

The candy is all made in North America by third-party manufacturers. Alina Morse has toured the plants to see the process. They each have “Willy Wonka chocolate factory” vibes, she said – just “not as whimsical.”

“It smells so good,” Alina Morse said. “I think my hair (still) smelled like candy after like three showers.”

A 25-count bag usually costs $5-7, which is comparable with other high-end lollipops. ZolliCandy is in more than 24,000 stores and has sold “a couple hundred million” suckers so far, Tom Morse said.

‘This lady does not need advice’

While Alina Morse is the CEO, the high school junior says ZolliCandy wouldn’t exist without her dad.

Tom Morse was a consultant for Deloitte for years, helping CEOs solve problems. He’s now a full-time employee at his daughter’s company, which has 10 employees.

“When Alina came up with this idea, it was really more, ‘How do I help her, just like I’d help any CEO?’” Tom Morse said.

He doesn’t mind working for his daughter. She’s a brilliant businesswoman who asks great questions and is fun to work with, he said — “everything you want in a CEO.”

“From the day they’re born, you’re kind of working for them,” Tom Morse said. “You’re helping them achieve their dreams and realize their potential.”

While Tom Morse has been in the big business meetings – from New York City to Paris – it’s Alina Morse who does the talking.

Her idea of healthy, allergen-free, tasty candy that’s good for your teeth has captured international attention.

She appeared on “Shark Tank,” but can’t say whether she made a deal or not since the episode never aired. Alina Morse reconnected with business icon Barbara Corcoran from “Shark Tank,” this spring while appearing on “Dr. Oz.” Corcoran was amazed by Alina’s pitch.

“This lady does not need advice,” Corcoran said. “She could advise me.”

While her friends are on Snapchat and YouTube during school lunch, she’s replying to emails.

“But I still have the same hopes and dreams of every high schooler,” Alina Morse said. “I’m nominated for homecoming court.”

She’s on the pom team and the tennis team. She can’t hold back a smile when describing how she was asked to homecoming. She’s thinking about which college to attend.

“It’s funny that people just assume I’m not normal because I have a job, or whatever,” Alina said. “But all my other friends have jobs. My job is just a little bit more time consuming.”